How Does One Become Holy? 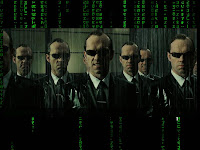 In the Matrix, there is a number of scenes where Agent Smith infiltrates a person, who then goes through what looks like a very painful transformation--stretcho, change-o, then snaps back into the shape of Agent Smith. Believe it or not, I actually think that is a great illustration of how a Christian becomes holy.

We look at a statement like "be holy as the Lord is holy," and instantly jump to the wrong conclusion: we think it is something we can achieve if we set our minds to it and get it done. Nothing could be further from the truth. It just isn't in the nature of the beast for a human to be holy. God alone can be attributed with that quality.

The most fundamental way to conceive of the notion of holy is to think "other" or "distinctly separate." No one can fit that description but God (see link in post title). Everything else, everyone else is just part of the creation, generally along with countless other examples of the same sort. "Other" in the realm of the created is a relative term at best!

God stands alone (and when I say that, I mean the trinitarian Godhead). Nothing else is what he is; nothing else has independent existence as he does; everything else was fashioned by him, yet he was fashioned by nothing. We generally jump immediately to the moral repercussions of God's separateness when speaking of holiness, but to do so is to not go deep enough into the subject.

If we don't plumb far enough, however, we generally devolve into some kind of petty rule keeping regimen in order to give us some sense we're aligned with the command to be holy. Holiness, however, can never arise from that which is intrinsically unholy. So, perhaps we need to rethink the force of the command, and see it more as an invitation. Like any of the commands of God in the old covenant, the point was not to elicit actual obedience, but to make us aware of just how unholy we truly are, and thereby to lead us to the gracious hand of Christ.

Oh, it's not that it's possible to be unholy and get along with with God, it's just that we can't achieve holiness by our own efforts. If we're to be holy, as we must to get into heaven (not to earn it, but just to survive it), holiness has to come to us, imported like oil is to Singapore. Since we must be holy to co-exist with God, we must come to Christ and receive the gift of his nature which alone is holy. When the holy one is in us, holiness becomes possible for us.
Posted by SLW at 2:28 PM 4 comments: Links to this post