Kingdoms for an Hour

It so happens that from this day back to the fall of Slobodan Milosevic (September 2000), the areas that were once under the dominion of the Ottoman Empire have seen remarkable upheaval. The unrest in a large portion of the Arab world today is in keeping with such an observation (see the map below). 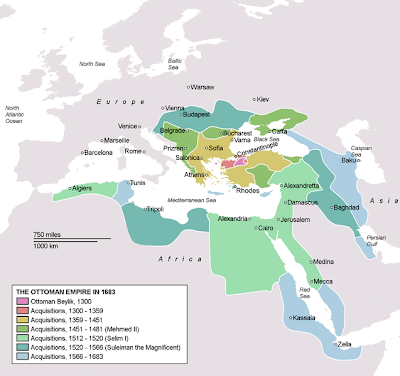 I was once asked whether or not the rise of the Antichrist would fit an Ottoman model better than the Seleucid (see map below) model I espouse. Geographically, it does seem a better fit for what the 10 Horns will cover. Although it did rule over the area where the empire of the Romans (Daniel's Fourth Kingdom) superimposed that of the Greeks (as would be expected), the Ottomon Empire traces its lineage to Central Asia, which I think is counterintuitive given the little horn descriptions in Daniel 7 and 8. That aside, there is the impassable hurdle that the Ottoman Empire does not meet the description given in the Apocalypse as "was, is not, and will come." It did not even exist prior to ~1300 CE (or ~1060 if one traces it back to the Seljuks), let alone 95 CE.

Recently, I was reminded by someone that back in 2008 I had stated from the pulpit that the kind of regime changing chaos we're seeing in the Arab Middle East today (and what we saw in the Balkans earlier) would be necessary if the Antichrist were to rise in our day. Long-entrenched autocrats (like Mubarak, Gaddafi, Hussein, Assad, or even Milosevic) that dominate the area that will be the 10 Horns would have to go, and within a relatively short time of one another--if we are living in that day. The Revelator tells us that 10 kings will receive their kingdoms for a short while, ostensibly to hand over the reigns of their kingdoms to the Antichrist. Could this be that day?

Of the list of possible candidates for the 10 Horns I've published, virtually all of them have gone through, or are going through regime change, and Greece is going broke. Syria now seems poised to join the rest. If this is the day, expect some kind of consolidation or federation of Syria, Iraq and Turkey to arise, led by a charismatic figure (at least to the Muslims) and growing talk in that region about some kind of reinvention of the Ottoman or Byzantine Empire or the Caliphate .