The Epic of Gog of Magog

What circumstance is Ezekiel 38 & 39 referring to and when will it happen? This article takes a bite out of that question.

Let's identify the players involved before getting into anything else. Scholars debate the identity of Gog and the location of Magog, but the description provided in the text says enough--"the far north”-- to leave little doubt, at least in my mind. The word far, as in "far north," is translated from a word meaning extremity (Hebrew: yerekah). If the longitude of Jerusalem is taken northwards towards its farthest extent, ultimately, it leads to Russia, falling just a short distance to the west of Moscow. That line does pass through Turkey, which is interesting of itself, and Ukraine, but the farthest extent is in Russia, so Gog is the ruler of Russia, which is Magog.

The rest of the cast are easily identifiable, for the most part. Persia is modern Iran and Put is modern Libya, little debate there. Cush is often misidentified as Ethiopia but it really refers to modern Sudan, the area of ancient Nubia. Gomer is best identified, it seems to me, by ancient references from Assyria as the Cimmerians, which places them around or just beyond the Caucasus, most likely in southern Russia. Beth Togarmah is hard to place today with any definiteness. Beth means “house,” so this is a tribal or clannish designation, often it's placed in Anatolia, but it's probably refers to the Caucasus as well, so Georgia, Azerbaijan, or perhaps Armenia.

In modern terms then: Russia, Sudan, Libya, Iran, and some representation from Georgia, Azerbaijan, and perhaps Armenia make up the alliance of Ezekiel 38 & 39. 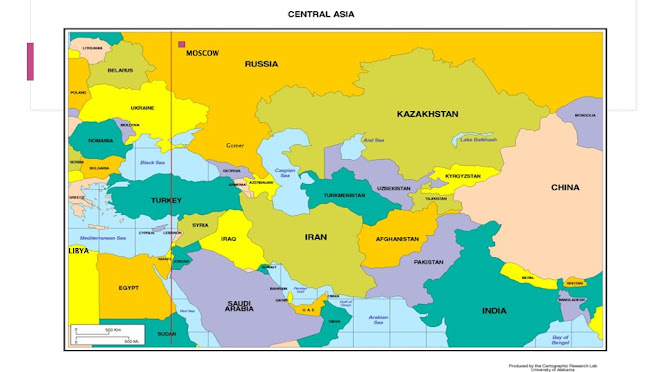 When will all this happen? The text says after many days, in the latter years, when the land (Israel) has been restored from war and the people of that land (Jews) have been gathered from many peoples upon the mountains of Israel, which had been a waste, but upon which they now dwell securely. That would be... now! In the aftermath of WW2, Jews began returning to the historic land of Israel (aliyah) in numbers, became an independent nation in 1948, and after several wars with her neighbors now dwells securely in this location. The land is restored and productive, so all that remains in this readied space is for the sudden surge, storm-like, of the Gog alliance attacking and invading Israel.

Why will they do such a thing?  Ezekiel says to loot. Israel is wealthy in our day, especially in comparison to its closest neighbors. It is productive agriculturally, has a strong economy and it is well-stocked with armaments-- certainly a trove worth plundering. Israel's wealth is a recent phenomenon, however, the nation has been considered wealthy by western standards only recently-- like in the last twenty years or so. From the perspective of the alliance I am sure looting is what they think their motivation is, but from God's perspective this is an action he's instigating and it occurs for his purposes.

God will put a hook in Gog's jaw and pull him back and into Israel for judgment, to express his fiery wrath, and to demonstrate his sovereignty over the whole world. In our day, Russia has had troops in Syria since 2015, some within 25 miles of Israeli-occupied Golan. Russians have supposedly been withdrawing from the neighborhood since 2016, but conditions in Ukraine have given added impetus to moving Russian troops and materiel out of Syria since May of 2022. As bad as Russia may need to get out of Syria to deal with issues elsewhere, Ezekiel 38 leads me to believe that God is likely to pull them back in, not stopping in Syria on the rebound but progressing all the way into Israel.

How will God judge the invaders? In several ways, but generally, it seems to me, some sort of volcanic cataclysm is the heart of the matter. Will it synchronize with the sixth seal, which I also see chiefly in volcanic terms? Perhaps, but not necessarily. There is that cryptic half-hour to deal within the Seventh Seal which seems to imply a short break between the Sixth Seal/Rapture and the start of the 70th Week/First Trumpet. Regardless, I do think Ezekiel 39 ends with the beginning of the 70th week of Daniel, as we shall see.

As far as the identifying the judgment as a volcanic cataclysm, all we have to do is consider the description to arrive at that conclusion. There is a great earthquake, landslides, rain, hail, fire and sulfur-- all marks of a volcanic eruption. There is, fortuitously, a volcanic system near enough to propound the possibility: the Levant Volcanic Province. It covers the Hula Valley in northern Israel, sweeps over the Golan Heights with its many cinder cones, and extends down into Jordan. Although considered extinct (e.g. Mts. Avital and Bental are said by geologists to have last erupted 10 kya.) I entertain the notion that what has happened there before could happen again.

In the chaos and confusion of the described events, presumably, the soldiers of Gog's alliance kill one another. Those not killed by another soldier die from sickness (pestilence), which I assume will be the effect of air fouled by volcanic gases and ash rather than some sort of contagion. This volcanism will occur on a scale large enough to affect the coastlands, likely in Lebanon, which would make this a larger phreatomagmatic eruption than what is witnessed in the geologic evidence in the area.

The end result of all this for the alliance is death. Their weapons end up providing Israel with fuel to burn for seven years (there's a span that rings a bell). Their bodies, exposed to the elements, carrion fowl and critters become the focus of a major effort to bury the bones over the next seven months. A burial site for the dead troops is made east of the sea-- whether that means the Mediterranean or Dead is hard to tell, but it makes sense to me that it would be east of the Dead Sea. The odd skeletal remain will be found occasionally long after the slaughter ends.

What is the end of all this for Israel, which is, after all, the focus of all end-times prophecy? A spiritual awakening is the obvious answer, but not just a period of revival. To catch the whole impact of this renewal we have to touch base with Daniel 9 and Romans 11.

In the present age after the cutting off of the Messiah at the end of the 69th week of Daniel, Israel was dispersed among the nations. A partial hardening had come upon the Jews from God because of (the implication is) their rejection of Christ and their unwillingness to depend on faith in God's mercy in Christ rather than their status as Jews and their religious works. The history of this age might give the observer the idea that God was done with the Jews, having cast them aside, but this age of partial hardening will only last until God is done with the Gentiles. Once his redemptive objectives have been accomplished with them, God will turn his redemptive attentions back to the Jews and all Israel will be saved.

The word translated “until” in Romans 11:25 always means “up to that time” in the NT. Therefore, this hardening in part that has come upon the Jews will only remain in place up to the time that the fullness (completion, Koine: pleroma) of Gentiles has come in. Then, the partial hardening which has let the Jews stew in their unbelief, allowing only a trickle of Jews to come to Christ, will no longer be in effect. What can that something be that turns the tide and turns hardening into openness? There’s only one thing that convicts people of sin, righteousness and judgment and woos them to faith in Christ, and that’s the Holy Spirit!

No one can, but Ezekiel tells us that after the Battle of the Gog Alliance the Holy Spirit IS poured out on Israel. When Daniel was told of the 70 weeks of work that God had left to do with the Jews and Jerusalem before everything was complete, Gentiles were not included, they weren't mentioned, they weren't in view. The 70 weeks are about Jews and God's work with them, not about God's work with Gentiles. 69 of those weeks passed until the cutting off of Messiah, at which point, God cut off (at least partially) the Jews. That means one week remains, one seven year period in which God will finish his work with the Jews and then all Israel will be saved.

So Ezekiel 38 and 39, The Epic of Gog of Magog, is actually the story about what touches off Daniel's 70th week.